When the Internet Archive gets a National Security Letter

Posted on July 8, 2013 | Comments Off on When the Internet Archive gets a National Security Letter

This post is off topic for this blog, so ignore it if you like. A number of people connected with archives and preservation activities read this, though, and I think it’s important for people to know that the Internet Archive was subjected to a National Security Letter and successfully fought it, thus becoming one of the very few recipients of these Orwellian orders to be allowed to talk about it. Please read the article.

The FBI has issued tens of thousands of National Security Letters. If you’re the target of one, you can’t tell anyone, not even your own family. The Patriot Act originally prohibited people from even talking to a lawyer about them, but that ban was struck down. I have never been issued a National Security Letter, so I can tell you I haven’t. If I had been, I couldn’t say anything, and if you asked me, I’d have to say, “I can’t answer that.”

Market researchers for websites don’t research the market any more. They research the competition in order to figure out how to imitate it. LiveJournal is making its site more Facebook-like in spite of nearly unanimous disapproval in the comments. WordPress has been infected with the same desire to imitate the “social media” sites. It’s implemented “infinite scrolling” of blog pages, making footers impossible and the question of whether something is on the current page ambiguous. If you try to get to the WordPress home page (www.wordpress.com), you can’t; you’re automatically redirected to your statistics page.

If I’m checking my spam list and happen to bring the mouse cursor over the icon of one of the spammers, a preview of the spammer’s page pops up. Because it’s “cool,” not because anyone in the world wants it to.

Is it only a matter of time before WordPress starts delivering RSS feeds out of sequence and arbitrarily leaving out some posts? I hope not.

Comments Off on Et tu, WordPress?

Comments Off on LinkedIn

Posted in off topic, Personal

The spammers are at it again

I just got an email at my work address from a “Sofia Rasmussen” proposing to do a blog post on the state of graduate education. Neither this blog nor Files That Last has any particular connection to graduate education. A web search reveals that “Sofia” has been spamming lots of blogs without regard to their subject matter. The game is probably to draw people to the URL mentioned in the mail.

Comments Off on The spammers are at it again

In spite of rumors that have shown up in the #hlth feed on Twitter, no one at the Harvard Library was laid off yesterday, let alone “everybody.” We were told, however, that there will be cutbacks.

We were told that we should all fill out “employee profiles” online to aid in determining what future career we’d have, if any, at Harvard. An official pronouncement quoted in Library Journal has denied that we will all have to “reapply” for our positions, but many of us find the distinction subtle even if it’s technically true.

Take a look at this post for a good summmary.

Further update: Here’s a transcript of yesterday’s presentation at Harvard. There is one significant discrepancy between the transcript and what I and others recall: Helen Shenton did not say at the 9 AM meeting that the deadline for employee profiles was February 29. The deadline was initially earlier — mid-February, I think — and was changed to February 29 by the end of the meeting, following numerous expressions of concern from the audience. (She may have said February 29 at the later meetings.)

Posted in commentary, off topic

Posted on November 15, 2011 | Comments Off on Closed access at Harvard

Sorry about the off-topic post, but this is the best channel I have for reaching the academic world.

Whatever Robert Frost may have said, something there is that really loves a wall. Specifically, fear does. The fear that looks askance at every foreign-looking person, that puts fortifications on our borders, that sees only the danger in contact from others. 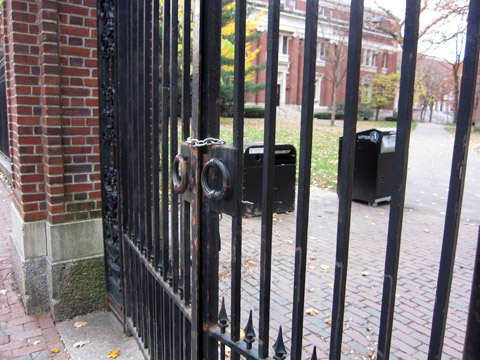 A small, non-violent (with perhaps an exception or two) mob assailed Harvard Yard last Thursday night, and Harvard gave in to fear. The gates were shut or put under guard for the night, which may well have been necessary. They’ve remained that way ever since. To get into Harvard Yard, you must show an ID or have an invitation. Today employees received an email giving the weekday and weekend schedules for the gates, suggesting this won’t go away quickly.

This is inconvenient for Harvard people and more so for others who have reason to visit. The tours of Harvard Yard are on hiatus. If you have an appointment or a conference, your host has to provide a list of the people attending so they can be allowed in. Lamont Library contains a repository of government records which is open to the public without an ID — but you can’t get to Lamont.

I don’t know how long this will go on. When vague fears drive a policy and no risk is too small to ignore, there’s no reason ever to stop.