The inventor of binary encoding

Posted on January 22, 2018 | Comments Off on The inventor of binary encoding

Francis Bacon may not have written Shakespeare’s plays, but he wrote the Novum Organum, a foundational work of scientific methodology. He did something else almost as impressive: He invented the binary encoding of text. In the early 17th century he wrote:

By “transposition” he meant the use of two letters, such as A and B, as units of an encoded message. They could just as well have been 1 and 0, or any other pair. Using five letters gives 25 or 32 possible encodings. AAAAA signifies A, AAAAB is B, AAABA is C, and so on. He said there were 24 letters in the alphabet because in his time I and J were considered the same letter, as were U and V. It’s a very short hop from this encoding to Baudot, and just an extension to seven letters (bits) to get ASCII.

A binary encoding can be concealed in any sort of data, as long as it has some capacity for noise. There’s a long-standing but dubious theory that Bacon concealed a claim to his authorship of Shakespeare in the First Folio. He supposedly encoded his message using two different styles of engraving the same letters. The letters in typesetting boxes weren’t completely uniform then, so that sort of cipher was possible in principle.

You could do the same thing by mixing normal and italic letters in a text. If normal text is 0 (A) and italic is 1 (B), then “Romeo” is AAABB, or the letter D.

The theory strains credulity, though. We’re supposed to believe that some highly trusted stooge of Bacon’s painstakingly picked the appropriate letters to encode these messages. The alleged font differences are so subtle that people can claim letters are Style A or Style B as it’s convenient, so you can “find” any message you want. Once your eyes blur enough, wishful thinking takes over. 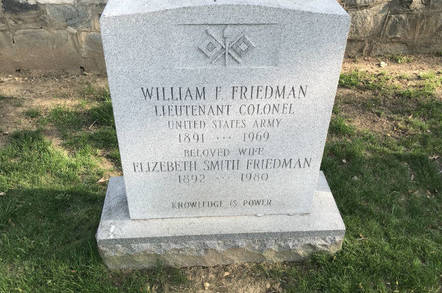 William and Elizebeth Friedman, pioneers of cryptography, got their start working on a project to confirm the existence of these hidden messages. They concluded that there weren’t any, but it got them hooked on the idea of decoding messages, and they did extremely useful codebreaking work for the Allies during World War II. Pick up The Woman Who Smashed Codes to learn all about it.

William Friedman may have used the Bacon code to deliver one last hidden message. William and Elizebeth’s gravestone bears the words “KNOWLEDGE IS POWER,” in what might be a mix of serif and sans-serif letters. The phrase has sixteen letters, enough to encode three letters in Bacon code, and allegedly those three letters are “WFF,” Friedman’s initials. Is this more wishful reading? How do you tell if the letter O is serif or sans-serif? Still, it’s an amusing idea.

Even if Bacon used his code to bury messages in Shakespeare’s writing, he didn’t pursue any other uses of it, and Leibniz usually gets the credit for inventing binary encoding in 1679. However, Bacon does seem to have been the first to come up with the idea.

This entry was posted in commentary and tagged ASCII, Baudot. Bookmark the permalink.